Wall Street is Clueless about Southwest (NYSE: LUV) (this snippet from a recent article in the TheStreet …)
Baggage Fees are NOT the Secrets to Profitability

If you ever need a reason to doubt the wisdom of Wall Street “gurus,” look no further than the recent outcry from analysts that Southwest Airlines (NYSE: LUV) needs to impose baggage fees in an effort to bolster its value.

Of course, I doubt most Wall Street hot shots ever take Southwest or even know how much it cost to book a flight to their favorite Caribbean getaways or ski chalets where the snow outside is about as high as the snow inside.

In any event, check out this snippet from a recent article in the TheStreet …

One such analyst is JPMorgan’s Jamie Baker, who, in one quote, summarized why most analysts don’t run companies, but instead, bet on their successes and failures.

“The impression that investors have is that your priorities at the moment might be somewhat out of order. The impression is that passengers come first, then labor unions, and then shareholders.”

Of course passengers should come first. Without the passengers, you don’t have a viable business!

The truth is, the Southwest empire was built on the understanding that passengers come first.

Putting the customer first should always be the priority. But this is just not how most folks on Wall Street look at things. They don’t get it.

And by the way, this idea that Southwest should start imposing baggage fees is absurd.

In 2014, analyst Jim Corridore from S&P Global Market Intelligence, referred to baggage fees as “low hanging fruit,” and insisted that it wouldn’t lead to one passenger defection.

Southwest has developed a relationship with its customers. Imposing baggage fees would undoubtedly damage that relationship which has been cultivated over many years.

The fact is, there are a couple of other budget airlines out there that would be happy to take market share from Southwest. And if Southwest were to piss off its most loyal customers, this is exactly what would happen. How a smart guy like Jim Corridore doesn’t understand this is beyond me.

Truth be told, I’d be more concerned about the company’s battle with the unions than the incredibly stupid idea of imposing baggage fees.

Apparently, the Transport Workers Union Local 555 is calling for the ousting of both the CEO and the COO of Southwest.

As reported by Bloomberg, the unions have criticized CEO Gary Kelly for spending billions on stock buybacks instead of plowing the money into updates of the airline’s aging computer system and for focusing too much on cost controls.

As I understand it, Southwest is already investing about a half billion dollars in a new domestic reservations system that’s going to come online in phases over three years. So who knows what the spat is really about.

What I do know is that whatever is going on with these negotiations, the longer they’re drawn out, the more they’re going to hinder operations and future revenue growth.

I would be concerned as a shareholder and customer if the company didn’t kiss and make up with the unions. Not that I’m some huge union supporter, but I do firmly believe that a positive relationship with employees is paramount to the success of any company.

In the meantime, while so many analysts are now lecturing Southwest’s CEO on how to run a business, let’s take a look at how Southwest has performed over the past couple of years. 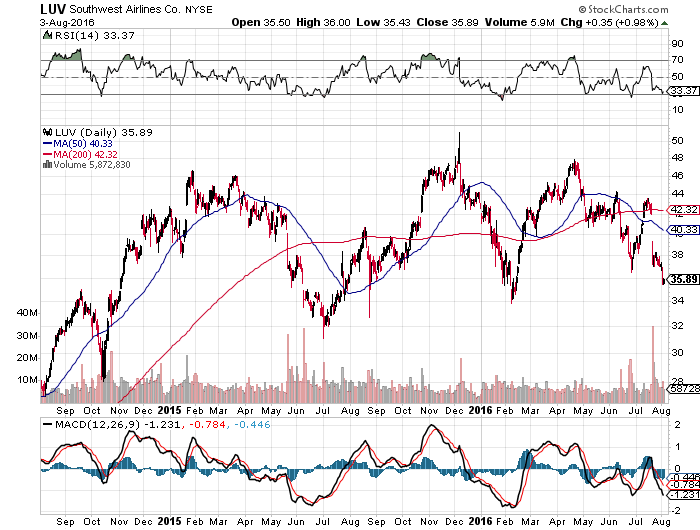 Had you bought shares of Southwest just two years ago, you’d be up about 28 percent today.

Compare that with the other major U.S. airlines over the past two years:

American Airlines (NASDAQ: AAL) – Down 10 percent
United Continental (NYSE: UAL) – Down 5 percent
Delta (NYSE: DAL) – Down 7 percent
I’m not saying Southwest can rest on its past history as a measure of future success. And certainly management has its work cut out for it right now. But if shareholders do have concerns about the company, they should voice those concerns with management while understanding that the key to success for Southwest has always been, and will always be, its strong relationship with the customer.

If management ever loses sight of that, Southwest will absolutely lose its competitive advantage. And at the point, no baggage fee or share buyback will restore it.